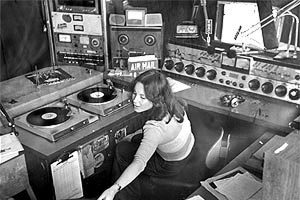 Since I stopped being on the radio, I have been keeping my ear to the ground and listening and watching the slow death of music radio. To me, music radio should be a place to hear all kinds of music and a venue to let the DJ educate the listener about all types of music, in the ways of the pioneer’s of FM radio DJ’s. The radio DJ of today in the majority of radio stations is a computer that has been programmed to play the music around the advertisements. It’s all done by some guy in another location who “knows” everything about what the listener wants to hear by studying charts and “data” of sales worldwide. But not what the market is like and what the demographics of the listening area is, so in other words taking local out of the local radio. We hear music that all sounds the same it “pre-programmed electronic Disco.” It’s time to give the control of the music selection back to the DJ!

WARNING – If pre-programmed electronic Disco is the kind of music you like then you might not want to read on, but I hope you do and you realize there are more kinds of music out there to listen too.

Let me impart some knowledge and history on you now – the FM radio signal, was invented in the 1930’s, but as a commercial medium it didn’t take off until the late 60’s. When rock radio stations began using FM to get away from the locked down format of the pop stations of the AM dial. The format used was loose and free, and the DJs programmed their music in a freeform style. This style was the birth of Freeform radio that was popular in the late 60s and the 70’s, but as the audience grew the radio station owners and advertisers realized that there was more money to be made in FM radio, then there was in AM.  So more and more structure was added to the format of the station thus tieing the hands of the DJ. Which eventually caused the replacing of a live person with the before mentioned computer, so that eventually FM music radio became sounding more like the pop formats of AM radio, with more commercials and less musical diversity, killing the Freeform format.

“Freeform, or freeform radio, is a radio station programming format in which the disc jockey is given total control over what music to play, regardless of music genre or commercial interests.” – Wikipedia

When I started in radio in ‘86, the Freeform format had been dead for many years, but no one had told me, I programmed my shows the way I made mixtapes, come up with a “theme” or a set of songs and fill in around them during my show. Because of this, I got called into the office more than once for playing a “B” side or a song that had not been released from a new album or the big one…it didn’t follow the format of the station. Little did I know that I was following in the steps of the inventors of the early “FM” sound…the Freeform radio DJ.

It wasn’t till I had stopped working in radio and listening to the stations in other markets that were still letting the DJ do a modified “Freeform” format that I learned more about mixing the music in a way that took the listener on a musical journey.  The songs were laid out to tell a story or they followed a theme, and they didn’t just use the top music of the day.  They used those buried gems on “Side 2” or a cover of a past hit or a B side to lay out the musical journeys, and they didn’t just use the music of the format of the station to take these journeys. Since the late 90’s trying to find a station letting the DJ go out and build these musical journeys is getting harder and harder, but soon I realized that Playlists could be a conduit to supplying a Freeform musical journey to others.

Since I can’t seem to get back on the radio to do a show in a Freeform type of format I have been starting to make 3 to 4-hour Playlists of the shows I would program.

Making a playlist for me is creating a piece of art, I start with a base of songs that I want to hear. One or two for the beginning of the list and then as I am listening to that I start adding music that blends and flows with the “base” songs that are going to be added or I might have a theme in mind or a story to tell through the music. Yes, my playlists will have a lot of the same artists as the “base” of all my playlists, but it’s what I put in the cracks between them that will take you on the musical journey.  My playlists are to listen to in the order they are laid out as though you are listening to a radio and not in shuffle mode

When it comes to music I have a broad taste, not just the Jam Band genre, like a lot of people think I do. I was brought up listening to all kinds of music, and I appreciate some more than others like most people. For certain songs, I might like a cover over the original version; for example, I like the Jerry Garcia’s Bands version of Bob Dylan’s “Tangled Up In Blue,” so in my lists I try to use the best version that fits, not just the one that I like.

This week, there is a new site where I will start listing my playlists so that you will be able to play on Spotify, and Amazon Music. I am open to comments and suggestions for songs or bands you might like that I would like as well, I am open to hearing new stuff, but please keep all comments polite and on topic and no hate.

Just in case you are a radio programmer reading this and listing to my lists who is looking for a DJ who doesn’t stay in the format box and loves to interact with the listeners and take them on a Musical Journey every shift contact me, please.

So in the words of Dave Herman from when he started The Marconi Experiment at WMMR in Philadelphia on April 29, 1968:

“Arise my heart, and fill your voice with music. For he who shares not dawn with his song, is one of the sons of ever darkness.” – David Herman

One thought on “Music Radio to Playlists”